Best Way to Play the Legend of Zelda Games in Order 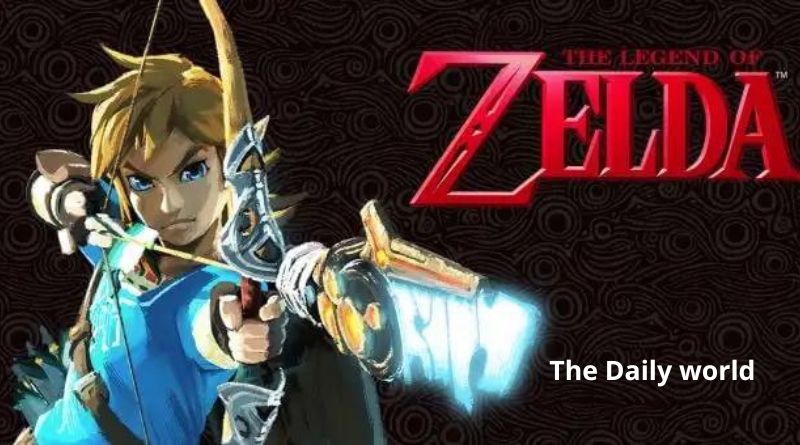 Outsiders may see that every Legend of Zelda title has a different story. There are only a few commonalities, like Link and Zelda appearing in each game.

Each game is linked through the background legend, so you can follow the storyline to play the games in a specific order. This order is not the same as the release order.

This article will explain where the canonically correct order is from and how to play these games.

The True Order of the Legend of Zelda Games

Nintendo published the Hyrule Historia Book in 2011. It detailed the complete timeline of all Legend of Zelda games. This timeline shows Link and Zelda reincarnated hundreds of years later into each game’s storylines.

The timeline starts with the history of the three Golden Goddesses who, after bringing order and peace to Hyrule’s world, created the Triforce (another recurring theme in the games). This is a powerful tool that grants all the desires of its holder. They gave the Triforce’s protection to Hylia.

Demise, a demon-king, rose to power against Hyrule. Hylia took all remaining human beings and brought them to Skyloft, a land in heaven. There, she also kept the Triforce.

Hylia sealed away Demise and created the Goddess Sword, along with the spirit Fi, to help a chosen hero get to it. This was to protect against the possibility of the seal being broken by the demon-king. In order to protect the Triforce, Hylia transferred her soul to a human to become Zelda.

These events are when the first game of this timeline begins. This is the beginning of the game. Link is led by Fi to draw a Goddess Sword. Zelda is also able to regain her memories as Hylia, the goddess Hylia. Link searches for the Special Flames to temper his sword into a Master Sword. He eventually uses the Gates of Time to travel back to the past to defeat Demise.

Many people and groups begin to search for the Triforce as word spreads about it. Picori, also known as beings from the sky, came to Hyrule to protect it from evil beings. The Picori Blade was used to accomplish this feat, and the Bound Chest sealed the evil away.

Vaati, a corrupted Picori, takes the Picori Blade, opens the Bound Chest again, and unleashes the evil. Zelda is then turned to stone. The king of Hyrule enlists Link to help him reincarnate as a blacksmith and end the curse that has been placed on Zelda.

Vaati reappears in this video, kidnapping Zelda while keeping her in The Palace of Winds. Link draws the Four Swords and splits him into four links. They collect keys from all over the country to get into the palace and rescue Zelda.

Ganondorf appears in this video game and tries to get the Triforce. To do so, Ganondorf curses the Deku Tree in Kokiri Forest to try to get the Kokiri’s Emerald. Ganondorf is about to die when the Deku Tree sends Link and Navi out of its forest. Zelda eventually meets Link, and they decide to travel through The Door of Time in order to reach the Triforce before Ganon. Link is unable to retrieve Master Sword from The Pedestal of Time and is then trapped for seven years in order to regain his status as the Hero of Time. Ganondorf darkened the land of Hyrule during those years. He was unable to get the Triforce in its entirety.

Link and Zelda get the two remaining pieces and can finally seal Ganondorf away from the Evil Realm.

The timeline can be split into three ways during the events of Ocarina of Time. The first is when Link is defeated and ruled by Ganon in the Fallen Hero timeline. The second and third take place when Link defeats Ganon. However, they are divided further into Adult and Child timelines due to Zelda sending Link back to his childhood during Ocarina of Time.

The Hero Is Deposed

This timeline shows Ganondorf obtaining the entire Triforce and defeating Link. Zelda and Seven Sages manage to seal Ganondorf in the Sacred Realm, but only for a brief time.

Link to the Past

After Hyrule has suffered many hardships, the King begins to search for anyone who can end it. The wizard Agahnim appears and brings order to Hyrule. The king then appoints Agahnim as chief advisor and priest. This power allows the wizard to brainwash Hyrule’s knights, and rid the king of his enemies, in an effort to break Ganon’s seal.

He locks Zelda up in a cell and she dials Link telepathically. He rescues Zelda and takes her to safety. Agahnim finally finds her and takes her. Link now has Master Sword and finds Agahnim who transforms into Ganon and defeats him.

Link now makes the decision to train to prepare for any future problems. He gets stranded on an island after he encounters a storm while on a boat trip. Marin, who is very similar to Zelda, meets him here.

Link realizes that he must awaken the Wind Fish in order to leave the Island. This would make the island disappear like a dream. Link finally does this and wakes up on driftwood from his old ship.

Oracle of Seasons and Oracle of Ages

Link touches the Triforce in Hyrule Castle one day, and it sends him to Holodrum. Twinrova and Twinrova, witches, plot to revive Ganon using three special flames as well as a human sacrifice. Holodrum: Link sets out to save the Oracle of Ages and Seasons to stop the flames from being lit. Twinrova captures Princess Zelda to light the third flame, but two of them get lit. Link defeats Ganon’s half-resurrected form and defeats them to end their threat to peace.

A link between worlds

Yuga, a dark wizard, transforms the Seven Sages into paintings. He also steals Zelda’s money. He can resurrect some of Ganon’s power and uses it against Link. Link can defeat him.

The Legend of Zelda

On the actual timeline, Legend of Zelda’s first game is very far behind. This game sees Ganon leading an evil army to reclaim the Triforce.

Zelda sends Impa as a message to Ganon. Ganon seizes Zelda and sends others after her. Impa eventually discovers Link and sends him on a quest for the eight Triforce pieces. This is what he uses to defeat Ganon. The problems within Hyrule continue to be caused by Ganon’s henchmen. Impa brings Link to North Castle where Princess Zelda lies in a cursed state. Link is sent by Impa to locate the last piece of Triforce in Great Palace to wake Zelda.

The Hero is Successful: Child Era

This is the split of the timeline. It takes place after Ocarina of Time. Zelda sends Link back to his childhood at the conclusion of the game. At this point, Link leaves Hyrule to search for Navi, his fairy.

Link gets lost in a forest during his search. Skull Kid is the Majora’s Mask-wearing Skull Kid. Skull Kid robs Link of his horse and chases him into Termina.

Skull Kid intends to destroy Termina by placing the moon above it. A link has three days to stop this fateful fate. He defeats the Majora’s Mask demon and leaves Termina to search for Navi.

In this game, Ganondorf has been sent by The Seven Sages to the Twilight Realm. Zant, one of the royal servants from the Twili families, is his partner in this realm. Zant will take Princess Midna’s throne. Midna meets Link in Hyrule, and they return to the Twilight together. Link is transformed into a Wolf form. Midna and Link defeat Zant together, and Link defeats Ganon using Master Sword. Midna returns from the Twilight Realm to break the link between the universes.

Hyrule and Gerudo tribe made amends long after Ganon’s passing. The tribe was home to Ganon’s reincarnation. He planned to free the evil Vaati from The Four Sword and created a Shadow Link alter ego.

Shadow Link freed Zelda before she could renew the seal of Vaati. Shadow Link released the actual Link, who took the Four Sword, split into four links, traveled through Hyrule, defeated Ganon, and finally sealed him in the Four Sword.

The Hero is Successful: Adult Era

This timeline occurs after Ocarina of Time and after Link vanishes from Hyrule after Ganon is defeated.

The gods submerged Hyrule in water to seal it, and Ganon with it. They moved the inhabitants to the mountains which were transformed into islands after Hyrule was submerged in water. The Triforce of Wisdom, a part of the Triforce, was divided in half and given to Hyrule’s king along with Zelda, his daughter. Link is rescued by the pirate Tetra in Wind Waker and discovers Master Sword. Ganondorf is defeated by Link. He takes the sword to Hyrule’s King, who repairs it. Link and Tetra go on to defeat Ganondorf once more. The Triforce is complete, but Ganon cannot use it. Instead, the King intervenes to ask that Hyrule be flooded forever.

Link and Tetra embark on a journey to discover the land. Tetra is seduced onto the Ghost Ship and taken from her. Link tries desperately to save Tetra, but he gets lost in the ocean. He ends up on Mercy Island where he meets the fairy Ciela.

Link and Ciela finally find the Ghost Ship but discover that Tetra was turned to stone by the demon Bellum. Link travels to forge a Phantom Sword and uses it to defeat Bellum to save Tetra. Link and Tetra continue on their quest to find a new country.

Link and Tetra eventually discover a land that is covered in Spirit Tracks. These were placed there by the Lokomo in order to seal the demon Malladus. This land was deemed the new Hyrule by Tetra.

These Spirit Tracks disappear after a hundred years. Link, now a Royal Engineer, and Zelda (the descendant of Tetra), travel together to repair the Spirit Tracks.

The Sheikah Tribe tried to stop Ganon’s next resurrection thousands of years later than the events of these games and 10,000 years before BREATH of the Wild.

A thousand years later, another Princess Zelda was created. She and Link set out to stop Calamity Ganon again. Link sustained serious injuries while trying to assist Zelda. He had to spend 100 years in the Shrine of Resurrection. Zelda was able to stop Calamity Ganon by herself, but she also had to seal herself with Ganon, since she couldn’t seal Ganon away completely without Master Sword which Link can only use.

Breath of the Wild

Zelda’s seal was weakening after a hundred years, but Link was ready for a new awakening. Zelda left Link the Shiekah Slate so Link could find Master Sword and free the Divine Beasts. Zelda was finally able to seal Calamity Ganon completely.

Which Order Should You Play Legend of Zelda Games in?

I recommend this official order to anyone new to Zelda. It can answer many of your questions and provide a more enjoyable experience.